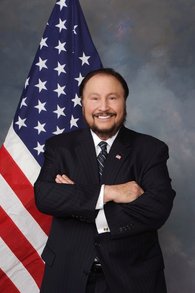 Hello to all the residents of our beautiful community! Since being elected to the office of
Mayor in 1994, Bensalem Township continues to experience a renaissance, even during these trying economic times, we are moving forward. As the “Gateway to Bucks County”, Bensalem (formerly known as “Cornwells Heights”) is a great place to live, work and
raise a family. As a native of Bensalem my entire life, I have lived, worked the land (DiGirolamo Farms) and raised my family in Bensalem.

Upon retiring from my farming business at the age of 51, I wanted to give back to the community that has given so much to my family. My mother and father, both immigrants from Italy, came to the United States seeking the American Dream. Through years of hard work, my parents achieved that success and taught their 4 children (I am the youngest of 4), to work extremely hard, to be
giving and never forget where you came from.

With that being said, I’m proud to be the Mayor. In the last 19 years, my goals have included aggressive programs that enhance the lives of our citizens. Bensalem Council and I have worked diligently to make Bensalem a place in which we can all be proud. It has not been easy, nothing worth having usually is, however my vision for a strong, thriving and dynamic community has come to pass and we work every day to ensure the community is headed in a direction that is right for the people.

Along with Bensalem Council Members, Joseph Pilieri, Anthony Belfield, Joe Knowles, Edward Kisselback and Bryan Allen, we’ve had an extraordinary record of success in making Bensalem “A Model for America", “1 of 100 Best Communities in the United States to Raise Children”, "1 of 100 Best Places to Live in America" in 2012 by Money Magazine, and most recently in 2014 "1 of 50 Best Places to live in America by Money Magazine."

While holding the line on your township taxes, we have improved the quality of life in Bensalem, which has made us the envy of surrounding municipalities. We’ve expanded our 120 acre Central Park, the home of the successful Penn Community Bank Amphitheater Amphitheater (Formerly TD Bank Amphitheater), created several new parks, most recently the “Fireman’s Field” located at Richlieu and Rockhill Drive, which is a state of the art soccer field along with a tot lot and general playground. Additionally, we built a new Senior Center, the Imagination Land Playground (for handicapped children), beautified the Route 13 corridor (originally known in Colonial times as “King’s Highway”).


Additionally, to save the Bensalem Country Club from land hungry developers (140 acres) Council voted to condemn the club under emanate domain and purchase the club for fair market value. The Club is now known as the Bensalem Township Country Club and has undergone massive renovations both with the greens, banquet facility and the pro-shop. An additional improvement phase is currently in discussion. This year the country club was named "Best of Bucks" by the Bucks County Courier Times.

In  2010 we built an Emergency Services Training Center, located near the Route One North Entrance. The center was built to provide all EMS personnel a facility specific for their needs, which in turn provides the residents with the peace of mind knowing their health, safety and welfare is our top priority. Bensalem’s Police Force is the largest in Bucks County..

As the “Host Community” to the now known “Parx Casino/Racetrack we have worked to address the traffic concerns by improving most major intersections throughout the township. Most recently a “slip-ramp” was built to allow access to the turnpike from Street Road (East only), with a new traffic signal to control the traffic pattern in that particular area. (Near Michael’s Café and The Sleep Inn on Street Road)

In light of the casino making its home in Bensalem and the resulting percentage proceeds we receive from the casino, in 2007, Council and I created the “Homeowners Assistance Grant Program”. This program provides each property owner with (occupied home and limited to one, please refer to press release on this website for more in-depth information). Do you know of any other community that provides you with a tax refund? It may not be a fortune, but it can come in handy.

PROJECTS ON THE HORIZON